Day 5: Albeau Closes to Within Half a Point of Iachino, While Cousin Questel & Offringa Cement Places at Top of Slalom and Freestyle Rankings

The wind eased slightly on Day 5 of the 2018 Viana PWA World Cup, but that still saw the Women’s Freestyle fleet reaching for 4.0-4.4, while the slalom fleets were generally on 5.6-7m between the Men and Women. Delphine Cousin Questel (Starboard / S2Maui) and Sarah-Quita Offringa (Starboard / NeilPryde / Maui Ultra Fins) have cemented their place at the top of rankings in Slalom and Freestyle respectively, while Antoine Albeau (RRD / NeilPryde) is firmly back in contention for the Slalom event title after winning his 4th race in 7 eliminations.

Sarah-Quita Offringa successfully defended her Single Elimination crown for the second time this week to remain undefeated so far and it looks as though she will make the perfect start to the season in her quest to win an incredible 11th PWA Freestyle World Championship.

Offringa came flying out of the blocks though as she opened with a super stylish one-handed double spock before adding a  planing forward loop, massive one-handed burner off of a ramp, regular kono and an explosive culo to defend her top spot, while Johanne didn’t quite reach the same heights in the final.

Meanwhile, despite going down to Aukes, Rümenapp can still be happy with her day's work after fighting back to 5th place in the second Double Elimination.

Delphine Cousin (Starboard / S2Maui) took another massive step towards world title No.3 today as she led from start to finish in Elimination 7 to claim her 4th bullet of the event to cement her name at the top of the event rankings. Cousin Questel ends day 5 with a 4.4 point advantage over Sarah-Quita Offringa, while she holds a huge 11.2 point cushion over Lena Erdil (Starboard / Point-7 / AL360 / Chopper Fins, so it would take a series of unbelievably bad luck or a catastrophic loss in form from herself and Offringa to be denied her 3rd world crown as a top 2 finish or better guarantees her the title.

Offringa sailed solidly again to take home second place, while Marion Mortefon’s (Fanatic / NorthSails) second 3rd place of the event sees the 26-year-old rise one place to 4th. That result puts Mortefon firmly in contention for the event podium as she now trails Lena Erdil by just 0.7 of a point, but more crucially Mortefon climbs above Maëlle Guilbaud (FRA - Patrik / Loftsails) - who is 5th - and is now firmly on course to earn her place on the overall podium for the second consecutive season.

Erdil remains 3rd, but her podium position is a risk after a mini slump in form - finishing 6th and 7th in the last two races, which is quite unusual for her.

At the start of the day - Lilou Granier (Starboard / Severne) - had the opportunity to bring herself into contention to challenge for the podium if she could maintain her excellent run of form, which had seen her record two 2nd places and a 4th from the previous 3 races, but unfortunately the 17-year-old fell at the first hurdle today as she was eliminated in the semifinals. Granier then won the b-final but remains in 6th place.

With the second discard coming into play after the completion of Elimination 7 - Matteo Iachino (Starboard / Severne / Shamal Sunglasses) - has seen his lead at the top of the event rankings eroded to from 8.7 points, at the start of the day, to just 0.4 of a point at the close of play after Antoine Albeau (RRD / NeilPryde), who opted for 7.8m and medium board - recorded back-to-back bullets by claiming a decisive victory in Elimination 7, which was his 4th victory in 7 races. The race for the event title is now poised on a knife-edge.

Iachino hadn’t put a foot wrong up to now and another Winners’ Final certainly can’t go down as a bad result, but the Italian said that today was his first real mistake of the event after taking too smaller sail for the final. Iachino still looked to be in contention at the first mark, but then struggled to get away with the wind becoming flukey during the early evening and then dropped his gybe at the second to finish 7th - a result which he instantly discards.

With the conditions becoming a little bit tricky during the evening Pierre Mortefon (Fanatic / NorthSails / Chopper Fins) opted to come back to the beach during the countdown sequence of the Winners’ Final after fellow countryman - Alexandre Cousin (Patrik / GA Sails / Chopper Fins) - was disqualified for a premature start. At one point it looked as though Mortefon may then be late for the green flag, but he timed it perfectly and his decision to change fin paid off handsomely as he earned his second best result of the week - 3rd - which cements his place in the top 3.

Mortefon now holds a 13 point advantage over Julien Quentel (Patrik / Avanti), who rises two places to 4th. The man from Saint Maarten made a slightly sluggish start to the event but has been in top form for the last 3 races - finishing 2nd, 3rd and 5th.

Ben van der Steen (I-99 / Gun Sails) had fallen to 7th place this time yesterday, but reestablishes himself in the top 5 after claiming 4th place today, while Cedric Bordes (Tabou / GA Sails) falls a further two places to 6th after being eliminated in the quarterfinals as Cousin flew down the final reach to snatch the last qualifying position into the semis.

Meanwhile, Pascal Toselli (JP / Loftsails / Chopper Fins) also drops a couple of positions to 7th. The Frenchman was second in the second semifinal as the pack approached the opening buoy, but dropped his gybe to miss out on the Winners’ Final and eventually finished 16th for the elimination.

The top 10 is completed by Antoine Questel (Starboard / S2Maui), who climbs to 8th from 10th after his best result of the event in Elimination 7 - 2nd. Jordy Vonk (Fanatic / NorthSails) remains in 9th place after finishing 6th today and Ross Williams (Tabou / GA Sails / Shamal Sunglasses) in 10th after an 11th in Elimination 7.

The forecast for tomorrow looks much lighter with ‘just’ 12-16 knots predicted at 4pm compared to just 15-21 knots today. However, with clear skies and the gradient wind still coming from the north-northwest that can easily equate into a sixth consecutive windy day. The skippers’ meeting for the Freestyle and Slalom has been called for 11am with the action commencing from 11:30am (GMT+1) onwards. 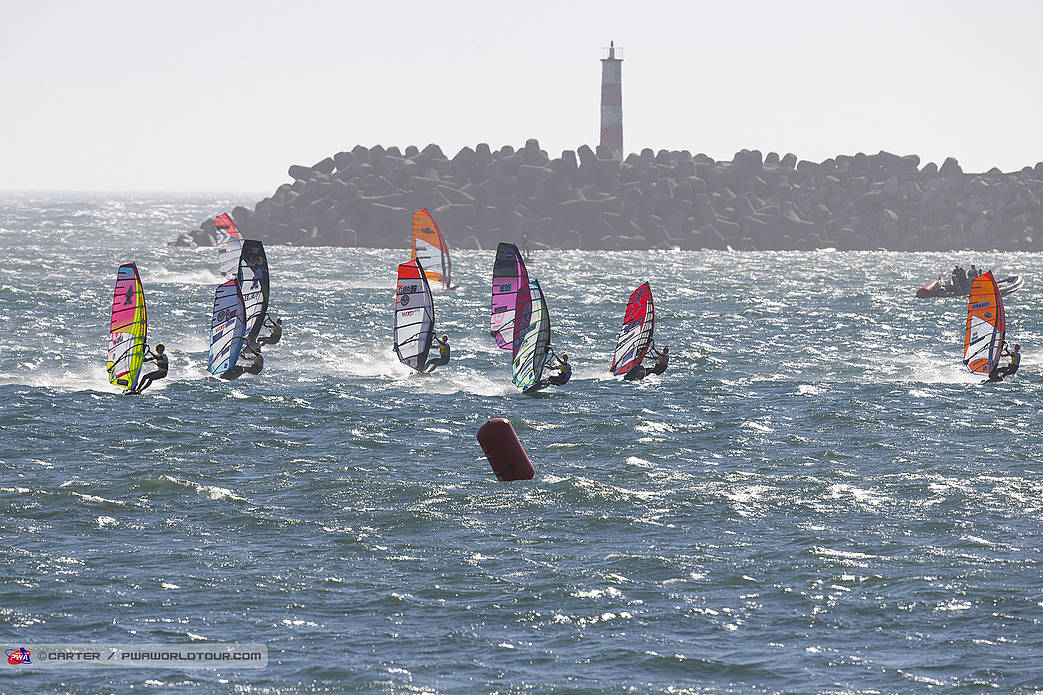