Day 4: An Unforgettable Day of Freestyle and Slalom as an Additional Topping of Waves Adds to the Spice
It’s difficult to know quite where to begin at the end of Day 4 as the 2018 Viana PWA World Cup continues to provide incredible conditions - for not just one but two disciplines. For the third successive day, the wind machine in Viana do Castelo absolutely cranked with winds gusting above 40 knots creating a competition environment you simply couldn’t keep your eyes off… firstly with the second installment of freestyle and then more frantic slalom.

Today witnessed the highest level of Women’s Freestyle ever seen on PWA World Tour as the top female sailors on the globe took full advantage of the idyllic conditions - small kickers on the inside and flat water in between the ramps - to deliver a powerful and dynamic display - consisting of an impressive repertoire of jumps, sliding manoeuvres and the latest power moves as the women truly showed what they are capable of…

Johanne pushed Offringa all the way as she excelled in the Jeri-esque conditions to land a backloop and a sick skopu to challenge the Aruban for the top spot on the podium… however, Offringa was at her formidable best, despite the wind dropping slightly in the final, as the 10-time Freestyle World Champion continued to impress… landing a powerful burner, regular kono and a textbook one-handed double spock to keep Johanne at bay. Offringa remains in control for the event title, while Johanne has given herself a great chance of moving into 2nd place in the opening event of the season.

Vice-world champion - Maaike Huvermann - looked to be in great form in her opening heat of the day against Mio Anayama (Starboard / S2Maui) as she posted a heat total of 116 points. However, at the start of the semifinal against Johanne,  the 20-year-old let a boat, which was clearing kitesurfers out of the contest area badly affect her mental state and as a result lost her style, focus and flow. Huvermann still finished 3rd after defeating Arrianne Aukes (Fanatic / NorthSails / Maui Ultra Fins) in the battle for 3rd and 4th, but must now find a way to mentally reset heading into tomorrow.

After the completion of the Women’s Single Elimination II the world’s fastest sailors returned to action during the afternoon, just in time for the wind to go nuclear as gusts over 45 knots and an increase in swell rattled through the bay to send everyone reaching for their smallest gear. In some heats, things became something of a battle of survival before the wind dropped slightly and became gustier during the early evening.

Delphine Cousin Questel (Starboard / S2Maui) saw her lead slightly reduced yesterday, but the 26-year-old has increased her advantage again - to 4.3 points - at the end of day 4 after recording her 3rd bullet of the week in Elimination 5, which means she remains firmly on course to collect world title No.3.

Sarah-Quita Offringa remains Cousin Questel’s closest rival and is still just about in touch after recovering from an 8th place in Elimination 5 - when crashing on the opening reach - by winning a hard-fought final in Elimination 6 as she just held off the searing challenge of Lilou Granier (Starboard / Severne).

The women’s top 5 remain unchanged from the start of the day with Lena Erdil (Starboard / Point-7 / AL360 / Chopper Fins) - 3rd - Maëlle Guilbaud (Patrik / Loftsails) - 4th - and Marion Mortefon (Fanatic / NorthSails) - 5th). Erdil could’ve been in contention for a 2nd place, but crashed her opening gybe when leading the last race of the day and had to settle for 7th.

Meanwhile, Lilou Granier rises into 6th place after a superb day which saw the 17-year-old earn two brilliant second places and if she can continue that red-hot form then she has a legitimate chance of earning a maiden podium with the second discard to come.

Fellow New Caledonian - Océane Lescadieu (NeilPryde) - also deserves a mention for somehow hanging onto a 6.4m for the entire afternoon, while the majority of the guys were on smaller.  The 22-year-old was prominently placed in several races, but then understandably became overpower at gybe marks to miss out on the Winners’ Finals.

The PWA would also like to wish Sarah Jackson (RRD / Maui Ultra Fins) all the best after the 20-year-old was taken to hospital during the afternoon - the extent / seriousness of her injuries are not yet know, but we wish her a speedy and successful recovery.

However, it is Iachino who is now in total control of the event after another sensational day. The 2016 world champion produced a superb overtaking manoeuvre in the Winners’ Final of Elimination 5 to overtake then leader - Arnon Dagan (RRD / NeilPryde) - as the Italian struck for his second bullet in 3 races, before claiming 2nd in Elimination 6 to open up an 8.7 point lead. Iachino’s performance up to now has been nothing short of exceptional - qualifying for every Winners’ Final and only finishing outside the top 3 once in that time. That means after 6 eliminations Iachino holds counting results of 1st, 1st, 2nd, 2nd and a 3rd.

Antoine Albeau remains in second place. AA was eliminated from Elimination 5 in the quarterfinals after a very uncharacteristic set of blunders in Heat 12, which saw the 24-time world champion drop an unheard of 3 out of the 4 gybes. Albeau then rode his luck to make the Winners’ Final of Elimination 6, but took full advantage of that luck by sealing his 3rd bullet of the event.

Pierre Mortefon moves into the top 3 for the first time this event after enjoying his best day of the week so far as the Frenchman claimed two 4th place finishes. The French continue to dominate the slalom scene at the moment with 5 of the top 10 sailors being from France - Albeau (2nd), Mortefon (3rd), Cedric Bordes (Tabou / GA Sails), who falls once place to 4th, Pascal Toselli (JP / Loftsails/ Chopper Fins), who climbs a further place to 5th and Antoine Questel (Starboard / S2Maui) - who completes the top 10.

Elsewhere, Julien Quentel (Patrik / Avanti) revelled in the sometimes wavy slalom conditions as he too enjoyed by far his best day of the event. The 32-year-old chased home Matteo Iachino in Elimination 5 to finish 2nd before claiming an excellent 3rd in Elimination 6, which sees Quentel rise to 6th, which means Ben van der Steen (I-99 / Gun Sails) falls a couple of places to 7th.

Having failed to make it past the quarterfinal stage in any of the first 3 races here - Ross Williams (Tabou / GA Sails / Shamals Sunglasses) - has produced a miraculous recovery since then. The Brit qualified for his first Winners’ Final of the week yesterday where he finished 6th, while he was bang on the money again today as he qualified for both WInners’ Finals. At the end of Day 2 Williams was ranked 24th, but after digging deep, when it could’ve been easy to throw in the towel, and finding a renewal in confidence and seemingly rediscovering his speed the 38-year-old has broken back into the top 10 - 8th at the close of day 4.

Jordy Vonk (Fanatic / NorthSails) remains in the top 10 - 9th - but had a day to forget after two quarterfinal exits. The second of which came in Heat 9 of Elimination 6, which saw 6 out of the sailors disqualified for premature starts.

Elsewhere, Malte Reuscher (Fanatic / NorthSails) moves into 11th place from 20th after performing brilliantly in the howling winds - finishing 10th and 5th today, while Bruno Martini (RRD / Point-7 / AL360) enjoyed his best day of the season after securing 5th place in Elimination 5, and 14th in Elimination 6. However, things could’ve been a lot better as the Italian was leading the semifinal of race 6 before dropping his gybe and then was extremely unlucky to suffer a broken mast just minutes before the b-final. There are plenty of positives for the 24-year-old to take out of today.

Diony Guadagnino (AHD / Loftsails) qualified for his first Winners’ Final of the event today after knocking on the door in the prior days. The Venezuelan claimed 6th in Elimination 5, while Sebastian Koerdel (Starboard / GA Sails) also booked his place in Heat 16 for the first time in Portugal.

The wind and waves look set to continue tomorrow  and based on the current WindGuru forecast the wind could easily each in excess of 40 knots again in the gusts, while the swell period and size is expected to increase as well. If tomorrow proves to be anything like today then it promises to be an absolute corker and you’ll be able to see it all live by tuning into www.pwaworldtour.com. 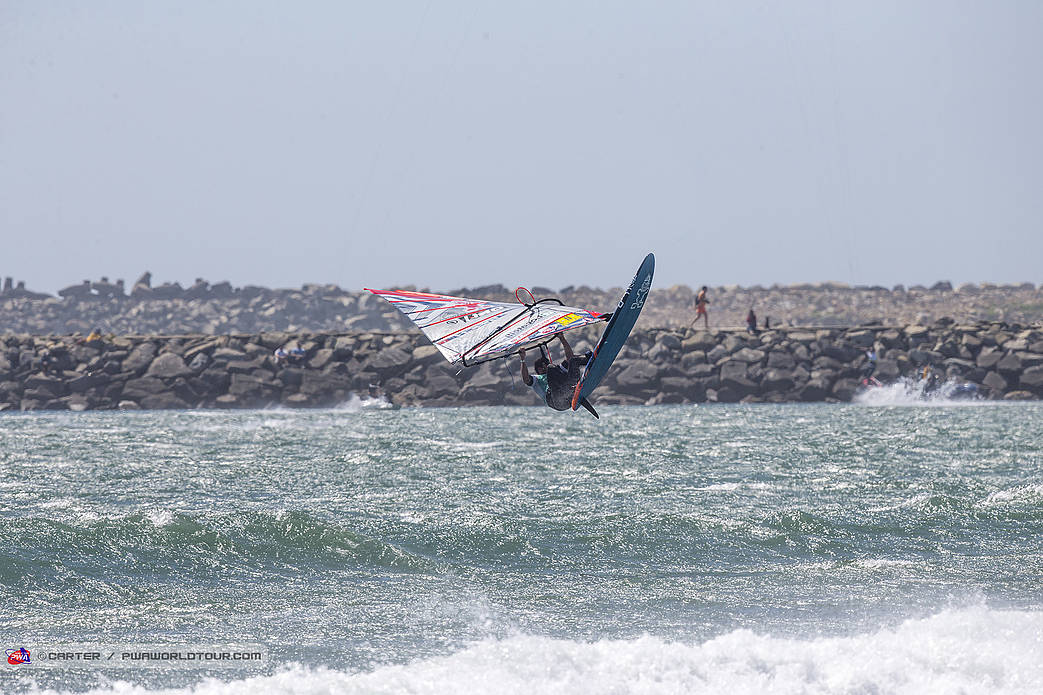